The Fox Has Spots - Month 6 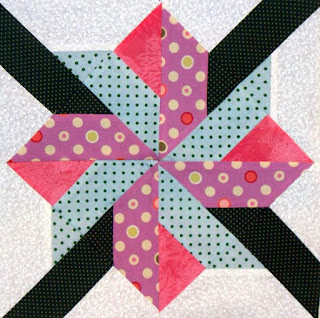 This is the block for month 6 of the Fox Has Spots, a BOM by Quilted Fox. I have been busy all day sewing on various projects that have to get done before our guild's quilt show in March. There is plenty of time to accomplish what needs to be done but frankly, I want everything finished as soon as possible so that other more enticing things can be tackled.

A major part of the day was spent trying to master (although that is far too grand a term to use for what my results were) Ricky Tims' piped mitered binding technique. Despite the ability to call up his video, "Grand Finale", at will on my laptop for step-by-step instructions, the end product was not as spot on as I wanted it to be. With binding sewn onto three sides of a small quilt, I threw in the towel on that particular project for the day.

The project is my entry for the President's Challenge. Our guild president sets a challenge to members for every quilt show. This year the challenge is "Gray - the New Neutral." Any shade of gray can be used and as many as you like. The gray tones are to be combined with at least 25% of one other eye popping color such as lime green or hot pink. Mine will be gray and neon orange. The size of the quilt is 100" total perimeter, or no larger than 25" X 25" if making a square quilt. So as you can see, it is a small project, and hey, why not try out a new technique while you're at it? The wisdom of that idea is being questioned by moi as this is being written.
By Mary Ellen at January 24, 2013