In setting the Grandmother's Choice blocks, it became apparent that some would need to be redone. Little Red Schoolhouse (the name of the block and NOT indicative of mine, obviously) is one such. Above you see the original block I did which more or less disappears into the background setting blocks. I was not really satisfied with this block when I did it. The striped fabric was supposed to look like siding or logs, but for some reason ended up going in the wrong direction. Plus it looks crappy. The second block is the remake. More contrast and not so vertigo inducing. 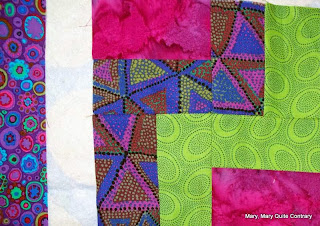 Rail Fence, called "Endless Stairs" in the Grandmother's Choice series, is another remake. I can't show you the original because I cannibalized it for the new one. There had been a dark purple Kaffe fabric (Aboriginal Dots) where the green now is. It looks 100% better in the newer version. Much more contrast within the block and against the setting patches. The small strip of fabric (another Kaffe - purple Paperweights) to the left in the photo is a try out for the border. A half inch strip of fuchsia will be inserted between the center blocks and border fabrics. I also have another fabric - Phillip Jacobs' Grandi Flora in much the same color way. It is a a large blowzy floral and a nice contrast to the mostly linear looking blocks.

Last but not least, is the remake of Broad Arrow. It is half done and I will show it with the original block when it's completed. The blocks are about one third pieced and I took a break to remake these three as a relief from the tedium of sewing all the blocks and rows together. At this point, once the setting and borders are decided upon, what remains is just a necessary chore to me.
By Mary Ellen at October 01, 2013