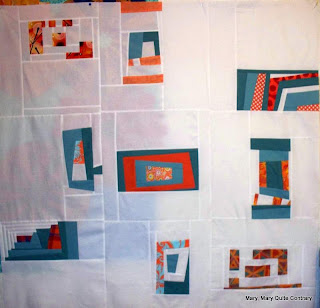 I took a class with Jacquie Gering of Tallgrass Prairie last month. The class was on improvisational piecing and based loosely on the traditional log cabin block. This is my completed project. It is hanging over another piece on the design wall, which shadows through on the left side. Anyway, some blocks I would do over if I were so inclined, which I am not. By the time the ninth block was made, it was time to move on. Some energetic quilting will provide surface interest in the large white areas. I tried one of each of the styles that Jacquie showed us, including tunnel, corner logs, courthouse steps, and "anything goes."

Later today several of us will be making a trip to Batiks Plus. Severe restraint will be needed.
By Mary Ellen at August 07, 2013