I have been doing a lot of what I would call utility sewing. Our guild's quilt show is coming up in about eight weeks. I have entered eight quilts and every single one needs a hanging sleeve. One needs a bit more quilting and the binding as well. And then, there are two large quilts that just went off to the longarmer this week. I have been promised that they will be done in plenty of time for me to add binding, hanging sleeves, and labels in time for the show.

Last year I put together blocks made by elementary school children. I mentor one day a week in a public school. The project was led by the school's art teacher and was inspired by the book, "Sweet Clara's Freedom Quilt." This week I finally got it quilted and bound.The story is about a young slave girl who sews a quilt with secret map blocks that will aid slaves escaping to freedom. Quilt historians have pooh-poohed this idea and really, if you have ever seen one of the rare extant slave quilts, you will see why. Roughly made from homespun fabrics that resemble slightly refined burlap,  they are utilitarian through and through. There is no historical evidence whatsoever to support this fantasy. Nonetheless, here is the quilt with blocks designed by the students. I have also been working on putting "The Puzzler" together. My small group of quilting buddies made the blocks for this quilt over a year's time. Each block has a bit of the inspiration fabric in it that we all used to get us started. The quilt show registrar has said that we need more quilts for the show and I was trying to get this finished in time. But don't like to be rushed, because then I just throw stuff together and regret it later, so this will probably not be in the show.

I gave up making the blocks on time at some point, and needed three more out of the 12 in the pattern. One has been made, but I still need to make three more. They are two of the three blocks in the next row, so work has been halted on the layout until they get made. Peeking out from behind the Puzzler blocks on the lower left is a bit of  Grand Illusion, Bonnie Hunter's 2014 mystery quilt, which has been put on the back burner while working on more pressing things. 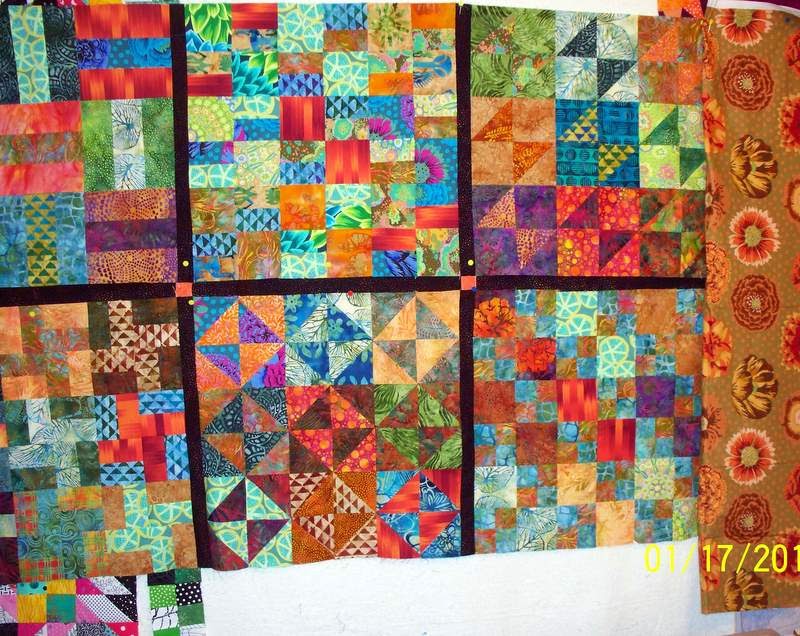 I am auditioning border fabrics and the strip on the right is "Big Blooms" by Kaffe Fassett in the brown colorway. I really like it for this project, but wish it had a bit of turquoise in it. Maybe more fabric hunting is in store for me.