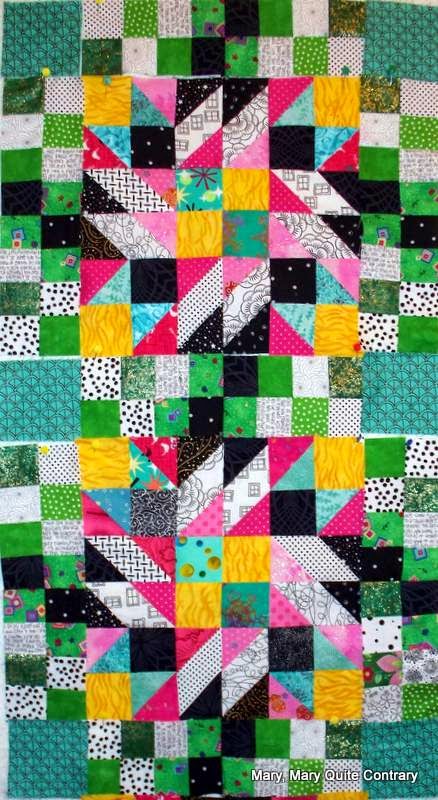 Bonnie posted the reveal of her 2014 mystery quilt, Grand Illusion, at midnight last night. I was able to piece together three of the blocks (two are shown here) plus several of the sashing strips. I had worked out that the 2 x 4 green, white, and black blocks were probably going to be sashing, but the rest was a complete question mark in my mind until the reveal. This is a very happy quilt and the sewing and construction this year is easier than last year's mystery. When you see the overall scheme, the black patches provide a lot of movement in the quilt, almost as though they are handing off one block to the next. Overall I am pleased with the fabrics I have chosen and no complaints about the colors either, as I stayed with Bonnie's suggestions.

UPDATE: This is as far as I got, so this is what I am posting at Bonnie's Monday Link-Up. Click on over and see what her other homies have been up to. Some people have not only finished sewing the quilt top together, but they have quilted their Grand Illusion as well!
By Mary Ellen at January 01, 2015