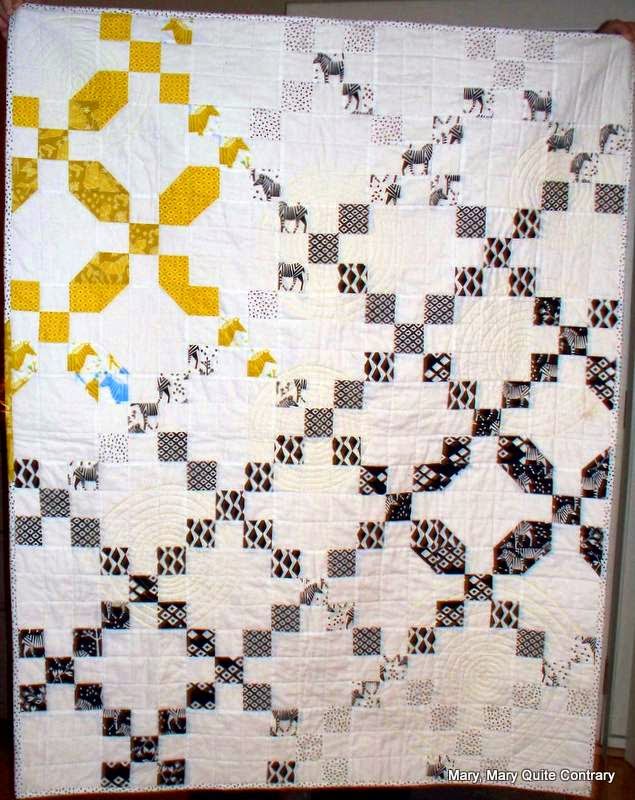 This quilt is intended for a friend's grandson. However, after it was finished, I liked it enough to consider showing it in our guild's March quilt show. Little John will have to wait a little bit longer. The fabrics are from the line OrigamiOasis and the pattern is "Starry Migration" by kayajoydesigns.com. The yellow print with zebras is meant to be fussy cut so as to show only yellow zebras, but I snuck in one blue one, hence the name of the quilt.

I quilted it all over in a 2" square grid with white thread. I had recently seen a video with Katherine Redford about machine quilting with a domestic home sewing machine. One of the techniques featured involved quilting in a spiral. Redofrd advises doing this only after initially quilting in a grid because the circular nature of the quilting can cause the piece to distort. Since the 2" grid was already done, I added a number of the spirals over the grid with yellow thread. The finished size of this quilt is 41" x 53" and I wouldn't recommend trying this with anything much larger because you have to continually turn the quilt around in circles under your needle. This was doable but I wouldn't want to tackle it with anything larger unless you have a pretty large opening to the right of your needle. Some of the new, really large machines would handle a bigger piece. I have a Bernina 560 and this worked well with it.
By Mary Ellen at January 05, 2015