Busy But No Final Products Yet

I have been working on several things as once - no surprise there. I made these three string pieced blocks last night as samples for a QOV project that our guild is doing. The hope is that it will spur guild members to make these simple blocks in between or along with their other projects and donate them each month at meetings. When it's time to construct our quilts, those who wish may make use of the blocks for the QOV they are making. Sometimes people just need a "visual." 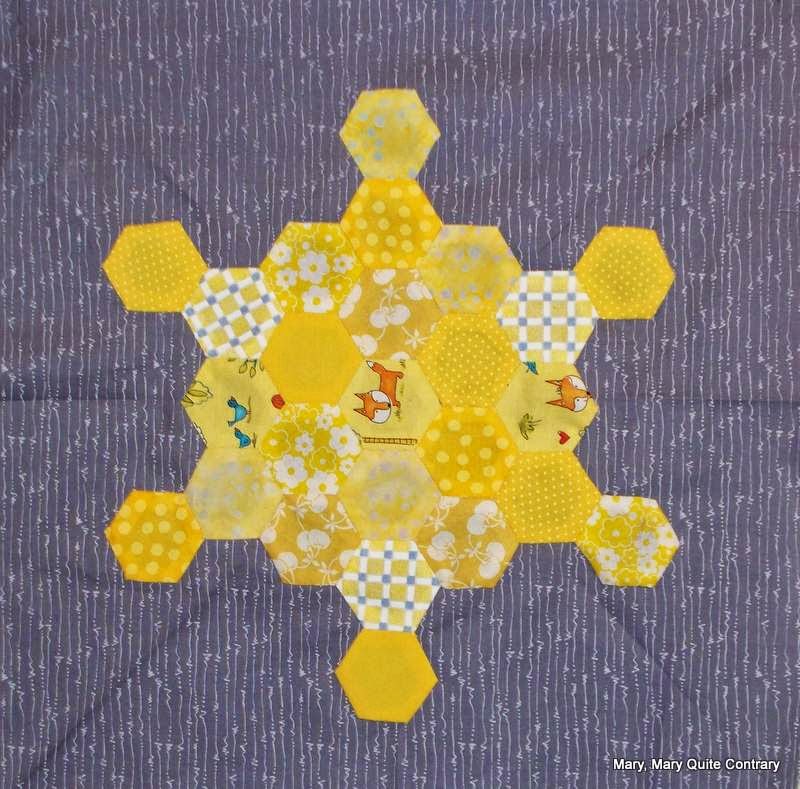 This is my August hexie blog that is featured at The Hexie Blog. As you can see, I had to truncate my sunflower by omitting the six outermost hexies in order for the flower to fit onto the background fabric. It looks from the photo as though there is plenty of room, but I haven't cut the background down to 15.5" yet. If I do that, then the edges of the flower will be at or on the seam line. Others making this project have had the same problem. Not quite sure what the issue is, but I like mine better anyway. Seems more sunflower-like.

Lastly, here is the first strip from a new hand applique project I started from "Savor Each Stitch" by Carolyn Friedlander. There are several projects in the book that are appealing to me, not the least because, although they are "modern", many are hand appliqued. So, the best of two worlds as far as I am concerned. The circles are freehand cut and needle turn appliqued. She says in the book that the variations thus produced add to the charm. Maybe it's just me, but I think that I will try using a template for the next strip. The first two circles on the left were cut without templates as suggested in the book. The others were cut using a large spool as a template and I simply drew around the spool on the fabric, rough cut with scissors, and needle turned them onto the strip. The "variations" don't look all that charming to me, especially once the circles were more or less uniform in size and shape. Then the "variations" really stand out. Plus they aren't really straight down the middle of the strip either. Live and learn. Pressing on....