My camera batteries died last week and I finally got around to replacing them. So a little catch up is in order. 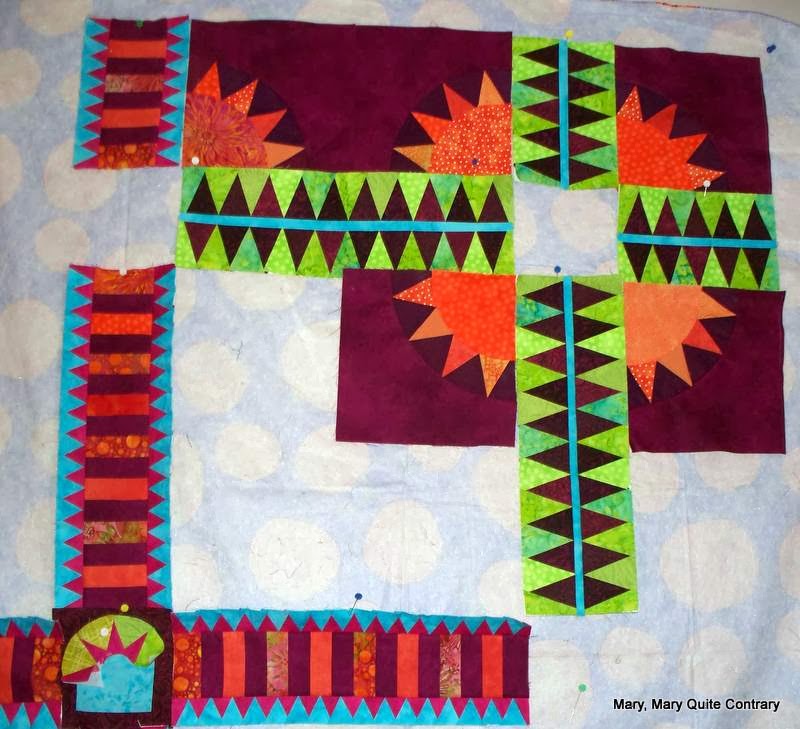 I am currently sewing the dark backgrounds to the orange and purple pieced arcs. There are thirty-six to do, so it's a bit slow going. Supposedly there are techniques whereby this can be done with only one pin and at lickety-split speed. Not! At least I can't do a decent job of it. The amount of reverse sewing involved quickly negates any time gained in going fast. Anyway, as previously mentioned, I do slow quilting unless working to deadline on a baby quilt.

My evening TV project is inspired from this Pinterest post. So far, only two diamonds have been completed. Remember, this is slow quilting. 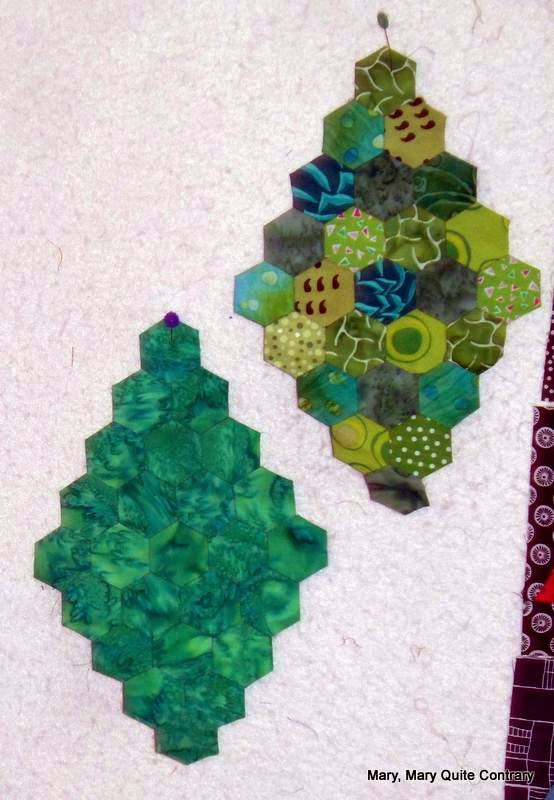 The lower diamond was made from hexies cut using a friend's die cutting machine. It's fast, but the look is monotonous to me. The upper diamond was cut by hand from a bag of scraps I keep under the ironing table and which will be used to for Victoria Findlay Wolfe's "15 Minutes of Play" workshop our guild is hosting in July. It's a lot more interesting - at least to me.

Yesterday our family celebrated January and February birthdays. There are nine celebrants, down from eleven, due to deaths in the family. One of those was Dad's birthday on January 2. His favorite cake, which I always made for him, was Black Forest Cherry Cake (Schwarzwaelder Kirsch Torte) made from a recipe in Mimi Sheraton's "German Cookbook." It is now out of print, I believe, and my copy is well worn. I spent a year in study in Tuebingen, Germany while in college and the recipes are authentic, but calibrated for American cooks using non-metric measurements. My friend's mother, born and raised in Germany, would consult it from time to time when she wanted a recipe for something. She also declared it authentic.

This is not the devil's food cake with maraschino cherries that you find in our bakeries here. It is a traditional German torte with no flour in the cake layers. Lots of eggs, separately beaten and folded together with grated bittersweet chocolate, cinnamon, and nut meal to provide the structure that flour would normally provide. The recipe calls for chopped candied citron, which I have always omitted, as no one in our family likes the stuff and in the middle of January is nearly impossible to find in the groceries here. The layers are liberally doused with Kirsch after they have cooled, then layered with chocolate buttercream and dark cherries. Finished off with a cloud of Kirsch flavored, gelatin-reinforced "Schlag" - whipped cream. Delectable. Very rich and only 8" in diameter, it packs a wallop of flavor.

How I ever made this thing 40 years ago without the aid of a food processor is a good question although make it I did. The buttercream is tricky because 5 egg yolks and two whole eggs are beaten until almost white in color (a good five minutes on my Kitchen Aid stand mixer). Sugar syrup boiled to the soft ball stage (238 degrees and yes, I use a candy thermometer) is incorporated into the eggs in a thin stream while the mixer is running. Failure to adhere to this protocol will render sweetened scrambled eggs. 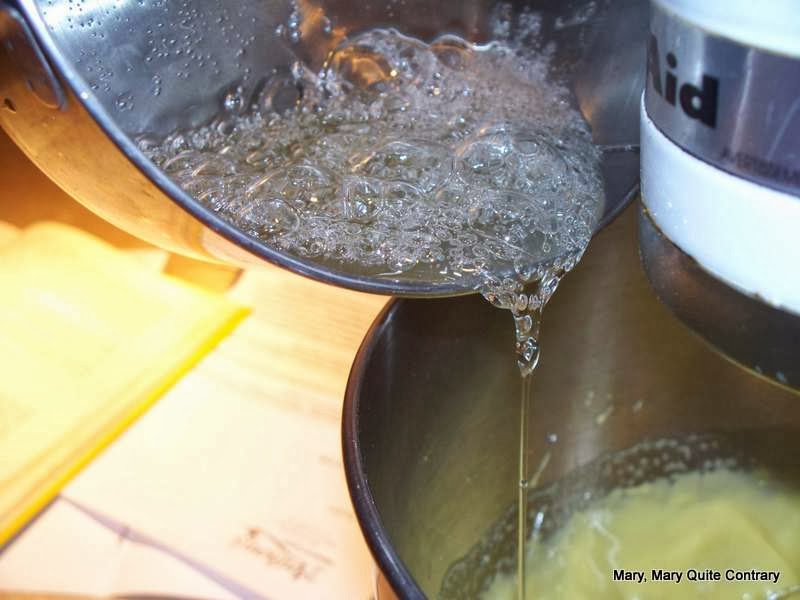 When the egg mixture is nearly at room temperature, softened butter (1.25 cups) is beaten in along with melted chocolate. 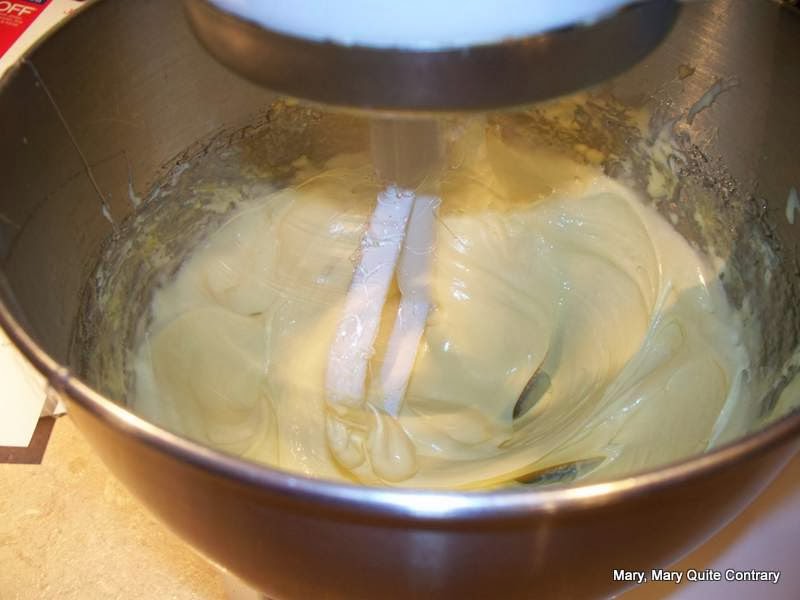 The sugar syrup makes a bit of a mess on the sides of the bowl and on the paddle, but a ten minute soak in warm water fixes that during cleanup. With chocolate added: 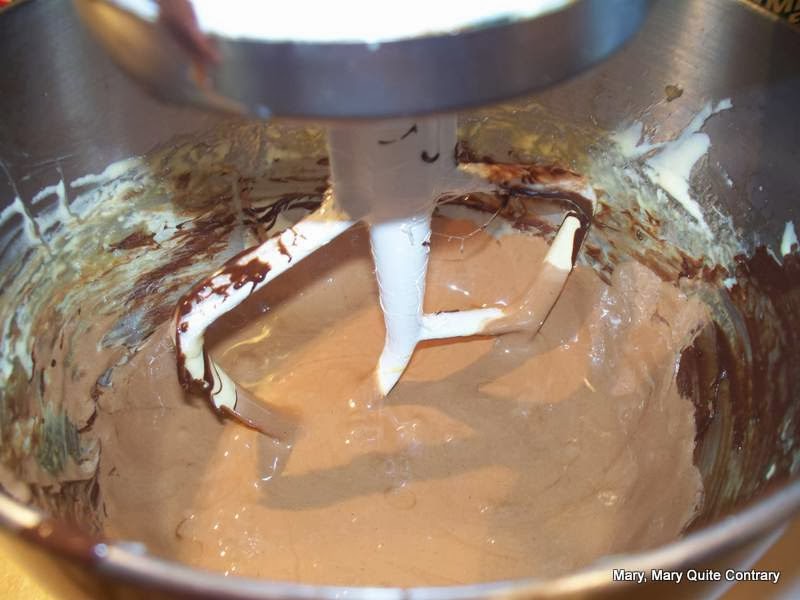 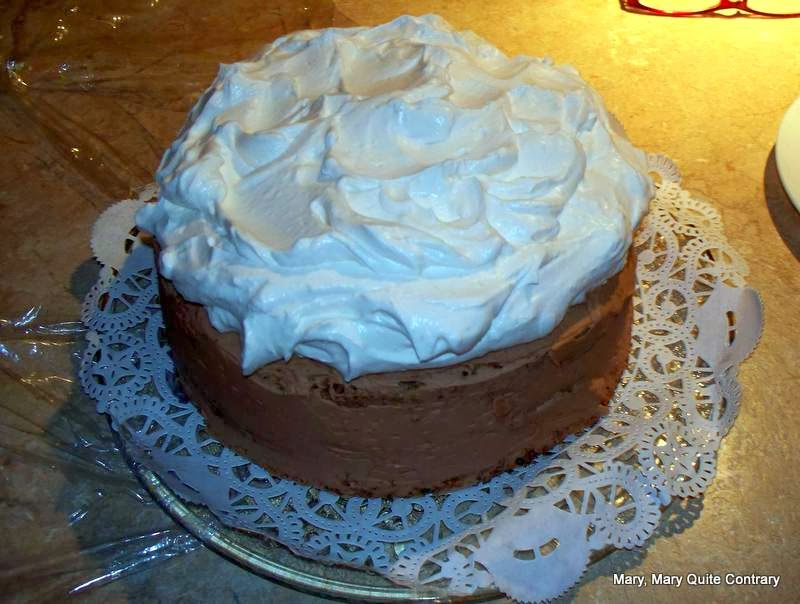 All that was left to bring home was a small sliver which DH and I will share with our afternoon cup of tea.
As I reflected on the cake last night, I realized that it is gluten free, too.