Fruits of My Labors 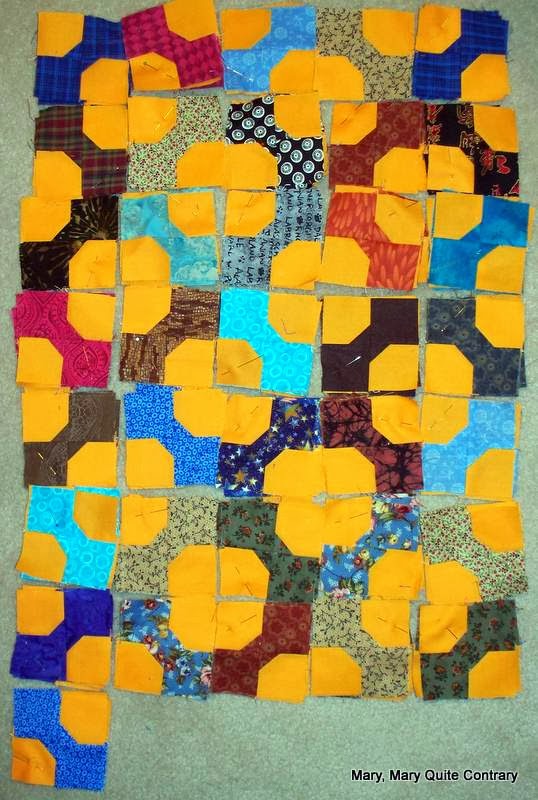 For a while now I have been making 3 inch (finished) cheddar bow tie blocks ala Bonnie Hunter. This particular project was posted by Bonnie as a leader/ender project. I tried that at first, but got so taken with the cute little blocks, that I began making them just for themselves. I am not real good at keeping up with cutting and organizing the pieces so that they are always at hand for leading and ending. It is also somewhat challenging for me to maintain the accuracy needed with these small pieces when quickly shoving them under the needle.

The past four days were spent at a quilt retreat and I got quite a few more made. What is depicted above are bowtie blocks pinned together in groups of four. There are 144 in the photo.The original plan was to set them together, cheek by jowl with no sashing in blocks of four each. If there weren't enough scraps to make four from a single fabric, then they were grouped into fours by color.

The most recent idea has been to set them on point, offset so as to make a zig zag pattern with cheddar sashing. These were by and large pieced on my Featherweight and I was a bit of an oddity in the group. Between my old timey sewing machine and the small blocks with tiny pieces I think that most of the others were flummoxed at what I was doing. Most everyone else was making quilts of panel prints with largish borders or another version (ad nauseam) of the Yellow Brick Road or Turning Twenty patterns. I have more quilts than I need and storage is becoming an issue. My explanation was that I do 'slow quilting' - little pieces and small blocks that need precision. I am not interested in slamming a bunch of large pieces together just to throw something together quickly. If it's not a bit fiddly, I lose interest, get bored, and quit.

Speaking of fiddly, I also worked on the TQS 2013 BOM by Sue Nickels and Pat Holly. I worked on the sashing pieces which are paper pieced. This is a departure from the authors' instructions, but a lot of us working on this project found the methods espoused by Sue and Pat to be pretty complicated. I, for one, found them practically incomprehensible. When I did understand the technique, my execution of it left much to be desired. 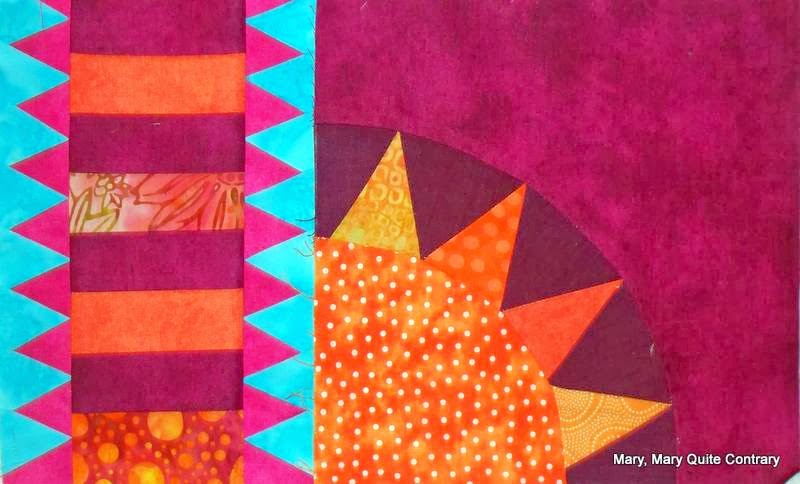 Inbox Jaunt (see "Blogs I Follow" to the right) has been blogging about keeping a quilt notebook. I have bought the notebook and dutifully completed the first task of making a list of my UFOs. This I did from memory, not caring to crawl and creep high and low in the sewing room to find every last bit of unfinished project. The list is up to 18 and it has been a good experience, forcing me to realize that perseverance is not my strongest suit. Interestingly not one of the projects has lost interest for me. If it had, it would be chucked onto the free table at the next guild meeting. Both of the projects pictured in today's blog were on the UFO list. They were pulled out and taken along to the retreat. If I only tell myself to work on each one for 15 to 30 minutes at a time, the task may not be as onerous and there may be some hope of getting them completed. That's my current thinking anyway.