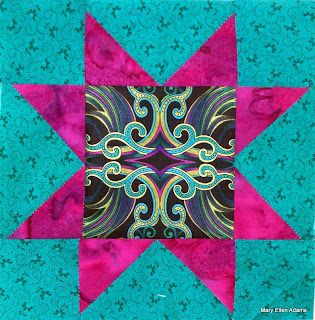 Nameless Star. Uh, not really, it has a bunch of names, most commonly Sawtooth Star. 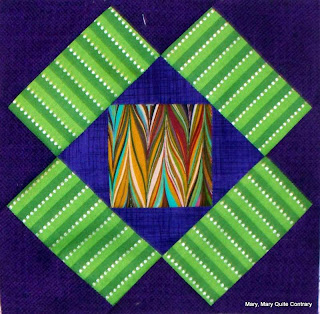 Nonsense. No, really, that is the name of this week's block.

In addition to Grandmother's Choice blocks, I have been working on quilting Pinwheel Daisies. On Friday a friend and I visited a local sewing machine dealer. She bought a machine and I didn't, although I was sorely tempted and still may go back and get one. Pfaff has a new small sewing machine, Passport. It weighs in at just under 14 lbs. and the Singer Featherweight was the inspiration. Passport has 70 built-in stitches, needle down, drop in bobbin, and Pfaff's iconic Integrated Dual Feed. As a promotion to introduce the new machine, an extension table with zippered carrying case and single hole needle plate was included. It's a very nice machine for retreats and classes, but you could sew on it every day.