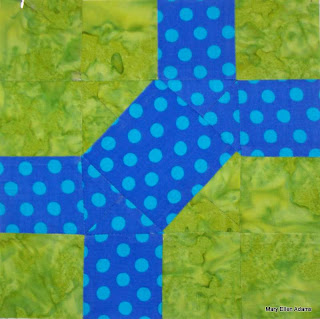 Last week, the block for Grandmother's Choice by Barbara Brackman was Mr. Roosevelt's Tie. Don't think of this as a bow tie, but rather the sort of ties worn with starched wing tipped collars. I am not yet quite caught up after a week of playing at retreat. I will tackle this week's Grandmother's Choice block tomorrow.

At guild meeting on Friday, one of the guild members was showing off blocks she made from "Folded Log Cabin Quilts" by Sarah Kaufman. The member in question makes any and all varieties of log cabin quilts and had made her blocks in black and white prints with bright vari-colored centers. Very striking. I had played around with these blocks a couple of years ago, and as with so many things, did not finish the project. I dug out the blocks and here two of five completed. 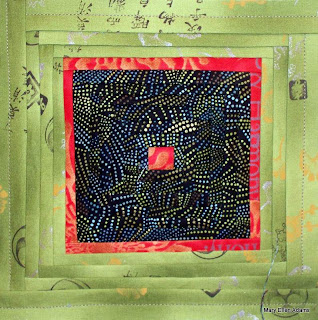 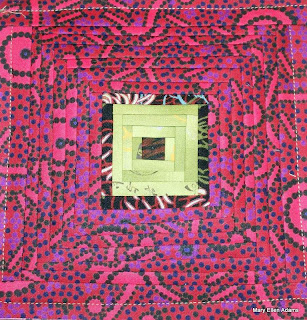 The blocks are made on a foundation of muslin and consist of rounds of folded strips or flanges. It makes for a somewhat heavy piece and would not be appropriate for a bed sized quilt. There will be twelve blocks in the sampler which will make a long and narrow wall hanging. I think this project should go to the top of the list after quilting the two baby quilts.