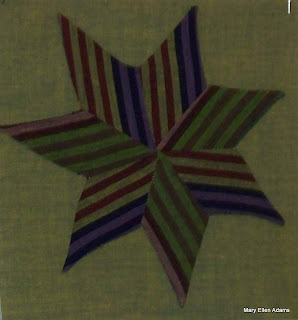 Grandmother's Choice this week is a seven pointed star for Australia. Can't say this is one of my better efforts. I should have starched the heck out of the fabrics BEFORE using them. This is a Kaffe stripe and the background is a Kaffe shot cotton. Really, folks, it does look a little better in person. All the colors are a bit brighter. When I tried to lighten it a bit with software, it just washed everything out.

This past weekend our guild held their biennial quilt show. By all measures it was a success, even though we won't have a financial report for a bit. Attendance was up by at least 10% over past years. Saturday was  International Quilt Day and Sunday was St. Patrick's Day, so maybe the two combined gave us a bit of extra luck. Ricky Tims generously allowed us to display five of his quilts, one of which will be sent on to Paducah for the April show. It was great to see his quilts up close and be able to study all the intricate detail. He may tout his "Caveman Quilting", but none of that was in evidence this weekend.

Four couples that quilt together were featured in the show also. Even though I know all eight of them, it was fun and enlightening to see their work displayed in this way.
By Mary Ellen at March 18, 2013