I have not posted in over a week because I have been in Texas at the Modern Quilt Guild's very first national quilt show, QuiltCon. It was held at the Austin Convention Center in downtown Austin. I was wowed by the vision and design sense that were on display there. It felt a little bit as though you were in a modern art museum and then again it didn't. What was especially pleasing to me was that most of the quilts were original designs and were, for the most part, quilted as well as constructed by the same person.

When I have attended the big national shows - Paducah, Houston, etc.,- I am overwhelmed with the intricacy of the work and feel it is not a level I can aspire to. I appreciate the originality of the work, the technical expertise, and the incredible doggedness it must take to put hundreds of hours of work into a show entry. Nonetheless, it seems totally beyond my reach. Not so with the modern quilts at QuiltCon. There was not one quilt that was over-quilted. Not one quilt with glued on rhinestones or crystals. Not one quilt with miles of metallic thread.  Anyway, here is one or two photos that I took. I didn't get all that I wanted as my camera batteries gave out. 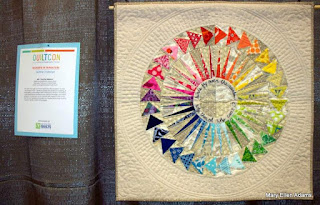 This is "Over the Rainbow", made and quilted by Janice Ryan of Glendale, CA and a member of Los Angeles Modern Quilt Guild. 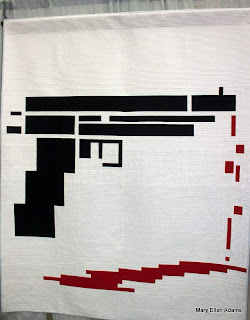 "Bang! You're Dead" made and quilted by Janice Gering, of Chicago, IL and a member of Chicago Modern Quilt Guild. 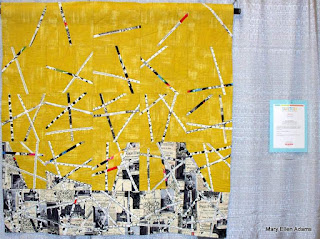 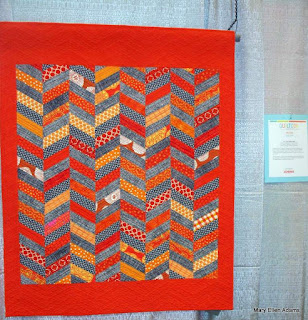 "The Caltrans Quilt", made and quilted by Susan Kephart of San Diego, CA, member of San Diego Modern Quilt Guild. 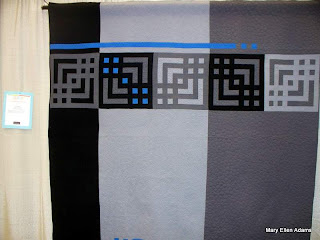 "Handyman", made by Jenifer Dick and quilted by Angela Walters of Harrisonville, MO. Kansas City Modern Quilt Guild. Here are two detail photos of the quilting: 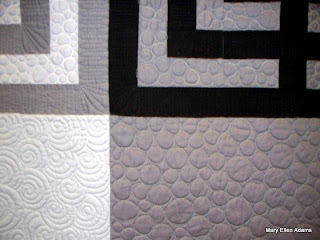 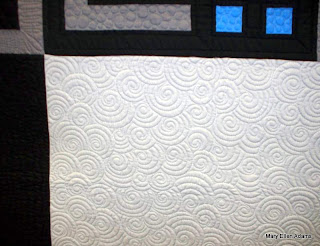