I have not touched En Provence since our group sewing day on December 31. Our guild's quilt show is fast approaching in March and while all six quilts that I am entering are finished and labeled, none have a hanging sleeve. I have figured out a method of sewing the sleeve on using the sewing machine, but it still takes time.

This week I made and sewed on the binding for this quilt: 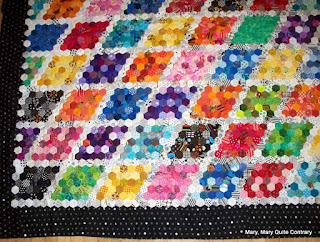 I made a flanged binding with the main color being black and the flange a black and white print. It is not hard, but I can't sew it on quickly because it is done flipped over to the front and sewn in the ditch. With the high contrast between the white and black, it required slow sewing. I used an invisible monofilament thread as well which helped quite a lot. Here is a closeup of the binding. And, of course, as things happen, you can see one of the places where I veered up out of the ditch onto the black. Sigh. I will fix that before show time. 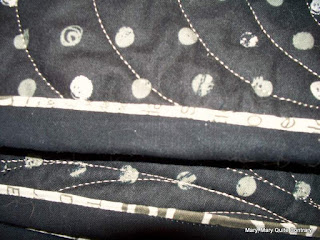 I have been working on the Carolyn Friedlander BOM, "Collection" over the past year. It is all hand appliqued within the blocks. I like to hand applique but have tired of what I consider the rather Victorian aesthetic I see in many of the patterns. This was a breath of fresh air and I thoroughly enjoyed every minute of it. I realized that there was only one relatively simple block left to do, so I pulled out the project and worked on it last night. Tonight should see the last block completed. 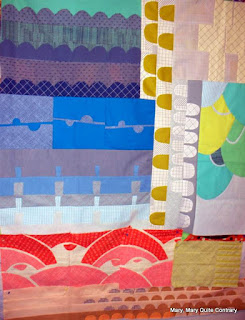 A second Carolyn Friedlander BOM, "Local", a paper-pieced pattern, has also been resurrected. I only finished 2 out of 10 blocks so far. The paper-piecing is not difficult, so with any kind of motivation, I should be able to get this finished by the end of January. It's good to have a goal in any event.

I really like her patterns, which you can see here. Neither "Local" nor "Collection" are shown but I think that's probably because they are still being offered as BOMs. I have "Grove" and the fabric for it. One of the ladies in my guild made "Catenary" as a commission quilt for the gift shop at the Jefferson National Monument (i.e. "the Arch") here in St. Louis. The Arch is a true mathematical catenary arch as designed by Eero Saarinen. I also have made a quilt from Carolyn's book, "Savor Every Stitch."I wish there were more quilt designers who made modern applique patterns.

Bonnie Hunter is currently mostly at home in North Carolina for the next couple of weeks and has pledged to spend one hour a day cleaning out and straightening up her sewing space before allowing herself to sit down and sew. I tried that out this morning and accomplished more than I thought I would.  Especially as at least half the time was spent petting the fabrics and looking over the projects I unearthed.

I have now earned myself the remainder of the day sewing, so I think with that, I will sign off.
By Mary Ellen at January 14, 2017