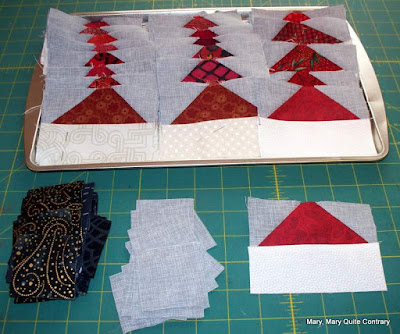 I finished the blocks and additional cutting for Bonnie's Mystery Quilt Saturday. I used the Companion Angle and Easy Angle rulers to make the blocks, after first trying four made with cutting rectangles and squares and flipping the corners. It was no more accurate - and in some cases less so - than using the rulers. Plus there was no fabric or time wasted cutting off all the flipped (and flippin') corners!

There is a mystery involved - one which has not yet been solved. After sewing the 80 blocks and pressing them, I pinned them together in sets of four. Wouldn't you know it, one set has only three blocks! Now where did that fourth one go? I am pretty sure I made all four, since I was cutting and sewing in groups of four.

Update: In putting my sewing room back in some semblance of order, the missing block was found as you can see in the photo above. To see what others are doing, go to Mystery Monday Link-Up.

My sewing room is in an uproar right now. The sewing cabinet is moved out from the wall in order to set a mousetrap behind it. Yesterday afternoon I spied a mouse running down the hall with one of my cats in hot pursuit. The mouse ran into the sewing room and right under and behind the sewing cabinet. Despite setting two of my cats behind the cabinet as well, no dead mouse resulted. Last night, after returning from dinner, two of the cats (there are three) drew my attention with lots of running and eventually growling. I discovered that Charley had a live mouse in his mouth. I picked him up and attempted to put him outside, mouse and all. He dropped the damn mouse onto the floor whereupon it scampered away. He quickly nabbed it again. When next he dropped it, it was dead. Enter the Y chromosome human to dispatch the thing to the outside trash can.

We set up mousetraps in the house just in case there were other vermin loose in the house. They were empty this morning. The strange thing about all this is that the "real" mouser of the three cats, Mickey, slept through the whole uproar on his favorite easy chair. He is the only one of the three that is allowed outside (he was an outside rescue cat that will NOT be contained in the house) and regularly deposits dead things outside the back and front doors. In the past he has brought live snakes, rabbits, and mice into the house. We suspect we were not vigilant enough recently when letting him back in. You have to check and make sure he has nothing in his mouth before opening the door to let him in.

So, maybe I can move my sewing cabinet back in place and get everything plugged back in. I want to sew already.
By Mary Ellen at December 06, 2015