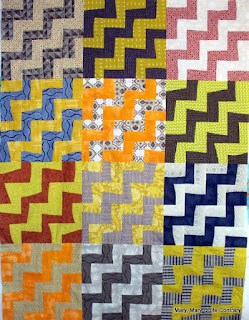 Earlier this year, after the book, "Cultural Fusion" by Sujata Shah was published, I made this smaller version of her Rail Fence quilt. Being smack in the middle of finishing things to hang in our guild quilt show, I nonetheless was compelled to break away for long enough to make these twelve blocks.

Fast forward to this month, and our guild hosted Sujata as our August speaker. Wow! She gave us a wonderful evening with a PowerPoint presentation which included many photos of inspiration showing life in her native country of India. Following the slide show, was a trunk show of the quilts that are featured in "Cultural Fusion." It doesn't get much better than that!

But wait! There's more! The next day there was a workshop with Sujata and we all learned how to free form cut blocks for Rail Fence. Here's my progress so far: 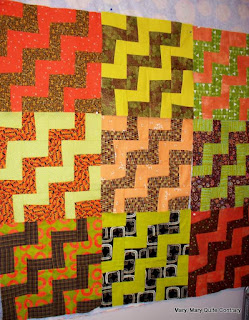 I intend to make the full sized quilt this time - 30 blocks! I asked Sujata to pick fabric combos for two blocks, so this quilt will carry a bit of her own "hand". She selected the fabrics for the blocks in the top row, center and second row, right. The layout will also be different, maybe with the blocks radiating out from the center, rather than stair steps as shown here.

These blocks are being cut with a gentler curve than #1.  After hearing Sujata's presentation, I realized that the idea is to show the human hand in the making rather than just to go all wonky and wild. That said, the wonky and wild Rail Fences that have appeared on the web are uber-cool, too. Sujata is a humble person; her warmth and humanity are apparent to all who come into contact with her. If you have the opportunity to hear her speak, or better yet take a workshop with her, do not hesitate. I hope that we see more from this talented designer in the future.

To see more about Sujata, here is a link to her blog, Root Connections , and to the Rail Fence Quilt-Along.