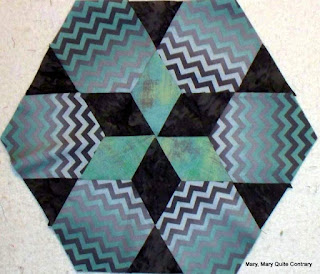 Gyleen Fitzgerald, author of "Polygon Affair" among other books, was a guest at our guild in June. I have been following her ever since, primarily on Facebook. She has begun a BOM for those who have signed up with her. This is my block for August. Done in the nick of time. It was not easy. Somehow I lost her butterfly seam approach and got lost in a welter of X, Y, and yes, even Z seams. It's not my best effort. The middle isn't too good and usually I can nail that. I probably should not have tried to make this on a treadle machine. I am not that proficient with it yet. I have been making oodles of string pieced blocks with the treadle and got cocky. It occasioned a goodly amount of reverse sewing before I could go forward again, using a modern machine. Plus the zig zag fabric could have been positioned better. But I hate doing the "f" word thing. You know - fussy cutting. It shows. September's block looks easier. Onward and upward.
By Mary Ellen at August 30, 2015