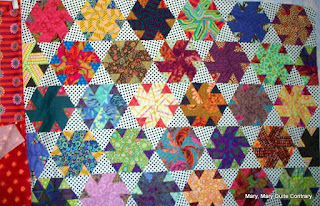 I finished most of this top a couple of weeks back. It has been hanging around on the design wall ever since. I have been pondering borders for it. Black was too heavy and there is no more of the black on white polka dotted fabric to be had. I like the orange stripe with flowers; it's Regency Daisy and although that little piece is all I have, there is more available. After that, I will try out some black and white prints for the final border.

I have been busy making cream and oatmeal and off-white half hexies by the zillions it seems. They will be the background of our guild's 2017 raffle quilt. I am up to 144 now and hope that will be enough.

Next up is a narrow Roman shade for a friend. Her front door has a small sidelight that she would like to be able to cover at night. The space is 43" x 14" - an odd and small enough size that nothing it available commercially. I have finally worked out in my head how to approach this. Now all that remains is the execution of said plan. I am hoping that there will be enough of the nylon cording left over from the Roman shade to make some piping for the Disappearing Dresden piece that I made in a class with Susan Cleveland a couple of weeks back. If not for the desire to sneak in a bit of piping, that piece would already have been finished.
By Mary Ellen at July 26, 2015