I have been in the California Bay Area helping my brother pack for a move to San Diego. After over 30 years in the same house, there was a lot to do. I turned into a packing machine. Give me a box and a tape gun and I will fill it! The time was productive and nearly everything that could be packed, was packed. Some necessary items in the kitchen as well as personal items such as clothing and toiletries, were left for when the house is sold and the final move is made. Next week the house will be staged and most of the remaining furniture removed. The staging company will bring in furniture that will maximize the space and depersonalize the house. A quick sale is anticipated given the shortage of housing stock in the area.

Every morning I went for a walk in the surrounding neighborhoods. My focus was documenting my favorite plants. Since I have not sewn in two weeks, today's posting will have nothing whatsoever to do with quilting. There were roses everywhere as this is an ideal climate for growing them. When I lived in California I had 30+ rose bushes in a garden next to the driveway in the front yard. Since the humidity is very low, the plants do not suffer from all the humidity related diseases that plague them here in the Midwest and which led me to the conclusion not to grow them here. To be successful, species roses (not landscaping shrubs commonly referred to as "Knock Out" roses) must be spayed with anti-fungal chemicals every ten days. I have no inclination to do that, not wanting to add to the environmental burden of growing roses and because I am lazy and would never keep up with that schedule. 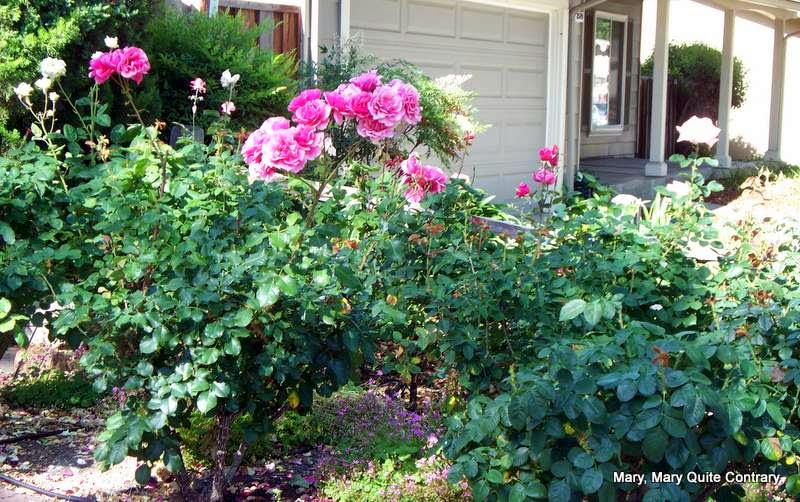 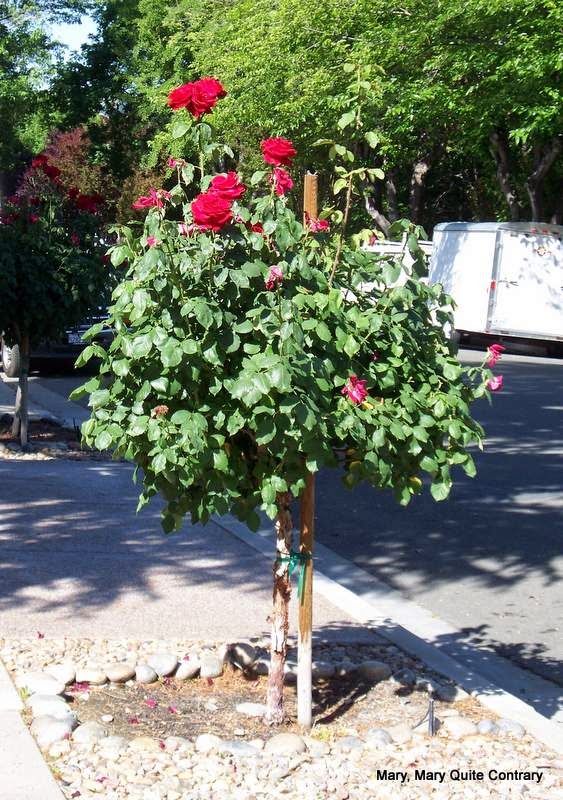 Tree roses are especially prevalent. You almost never see them in a climate where the winters are cold as it is here as there are two bud unions - one at the bottom of the treelike stem and the other at the top. Both must be protected in winter, which involves digging up the plants each fall and heeling them in - digging a trench and covering them with dirt and mulch so that the bud unions don't freeze. Labor intensive to say the least. If you look closely, you can spy the drip irrigation emitter in the lower right hand side of the photo. That's one of the secrets to growing roses successfully in such a dry climate. Because of the extreme drought conditions in California and restrictions on watering lawns and shrubs, the future of this type of gardening is not optimistic. 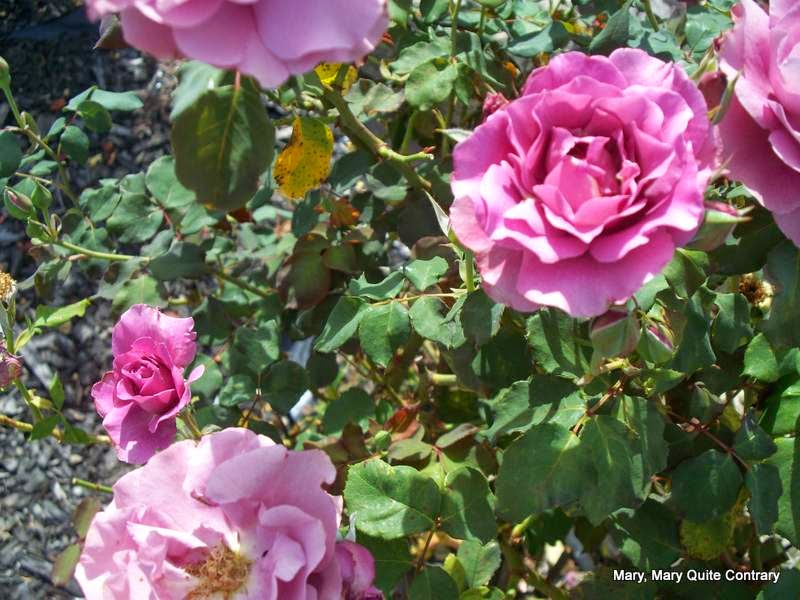 This is Angel Face, a lovely lavender rose (although it looks pink in the photo) with a ruffled edge that I had in my California rose garden years ago. Still like it. Here's another view. 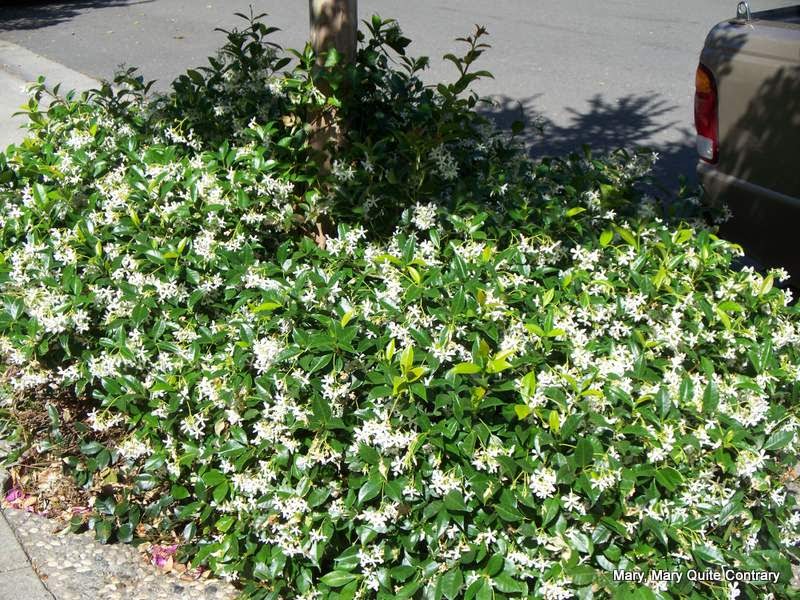 Mounds of jasmine are everywhere. You can smell them if you can't see them. A lovely fragrance if outdoors, but they quickly become cloying if not downright nauseating indoors. 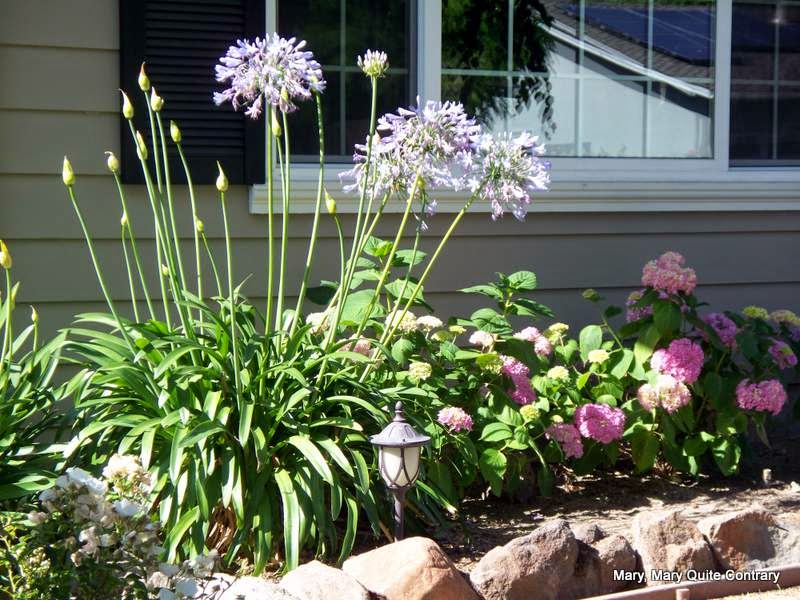 The tall flowers are agapanthus, commonly called Lily of the Nile. They can also be white, but the purple ones are particularly lovely. I just learned that these plants are hardy to zone 6, so they can be grown here. Never knew that. I may try to find a source for them. Next to them are pink hydrangeas. 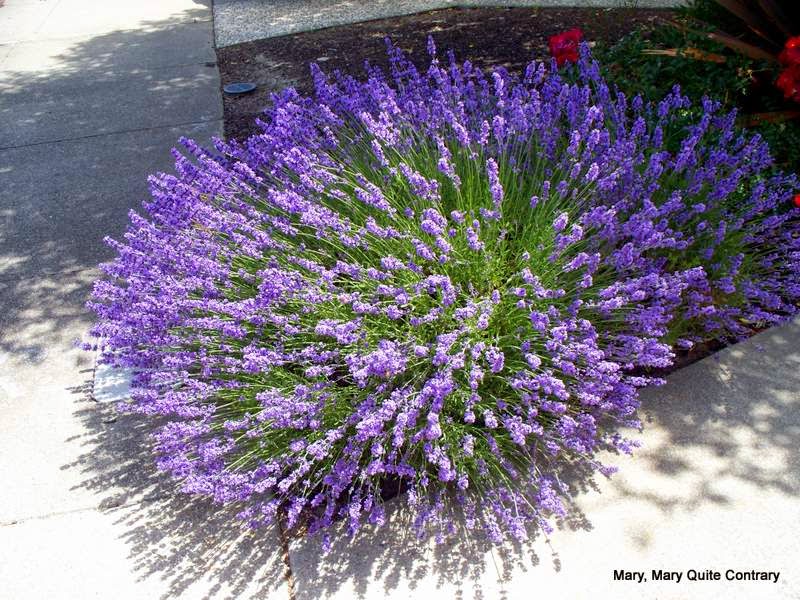 This part of California is considered a Mediterranean climate and this large clump of lavender proves it. While we can grow lavender here in the Midwest, it never seems to be as lovely and full. 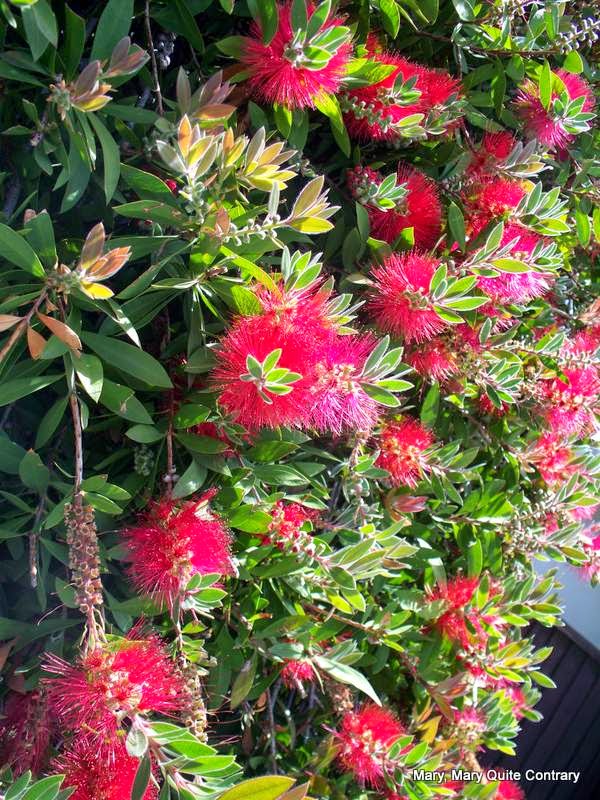 Bottle brush (fothergilla) is often seen in California and other semi-arid climates. It is drought tolerant but needs a water source. Humminbirds love this plant, which can grow quite large, as this specimen had. It reached way past a six foot tall privacy fence. My estimate is that it was 12 feet tall. 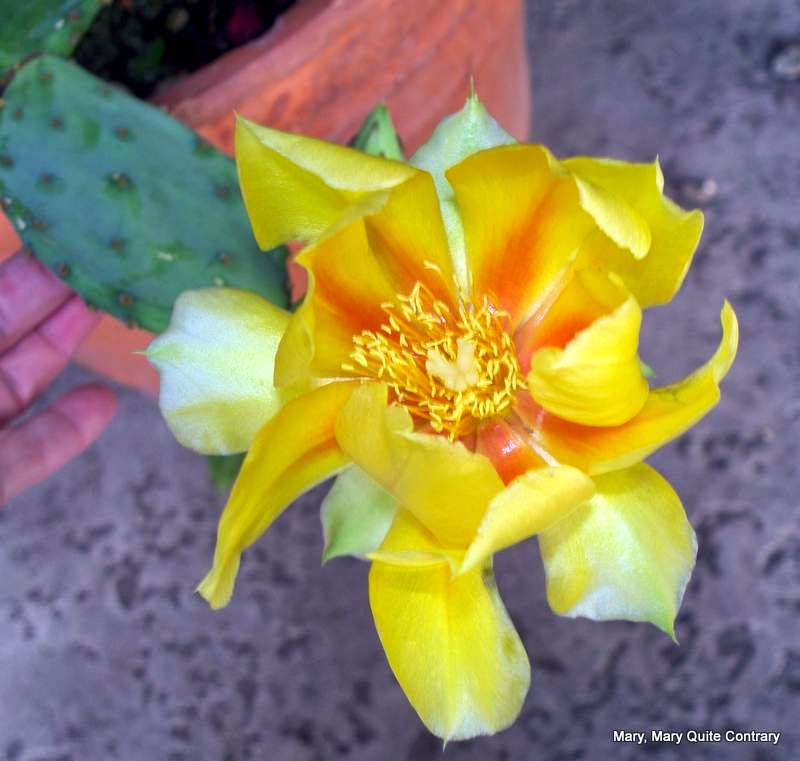 Opuntia cactus, growing in a pot in my brother's backyard, was in bloom. Stunning. All the paddles had flower buds on them and the next day there were two more open. 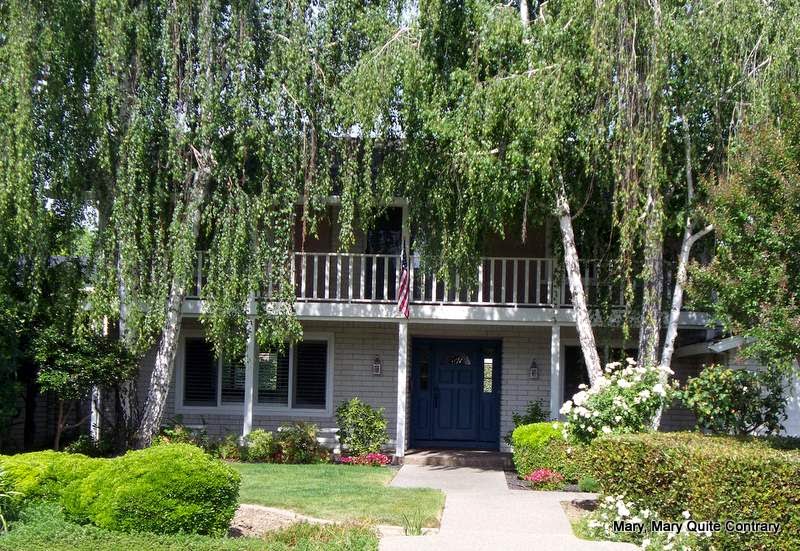 Many of the houses had porches or verandas. This was one of the loveliest I saw. It's hard to believe, but there was not so much as a footstool on this balcony. If this were my house, there would be comfortable wicker furniture where I could sit and read or hand sew. The river birches framing the house are typical of what you see in the area, as they grow quite tall and are apparently rather old. I had thought that these trees were relatively short-lived, but not here.

Having been away, there are a lot of little things to attend to here at home before I can get back to sewing and quilting. More about quilting coming soon.