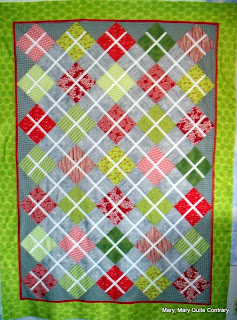 On to the next project! I have Grandmother's Choice to square up and add borders to. I have the fabrics for the borders, so maybe later today I can get to it. Last week I was able to score some nice fabrics at bargain basement prices when a local store had a fall sale. Backing fabric for $1.99 per yard and no junk fabric, either. Backing for Argyle Christmas was among the finds.

Our guild meeting this month featured Becky Wright, who styles herself as a Civil War presenter. She has a soldier's quilt that was hand pieced by a very young (18 years old) Civil War veteran who was seriously injured in a skirmish in Indiana. The young man sustained the injury within three months of mustering into the army. This is the quilt he pieced while recuperating: 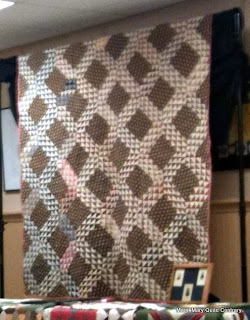 It is an Ocean Wave quilt and the quality of the photo is not great because I cropped and enlarged it from another photo. The fabrics are all Civil War or pre-Civil War vintage. While the quilt was in St. Louis, Ms. Wright was able to get it appraised by an AQS certified quilt appraiser who was over the moon at the opportunity to see and evaluate the quilt. Words like "pink seaweed", "authentic indigos", and "brown madder" were tripping off her tongue nonstop.
By Mary Ellen at November 17, 2013