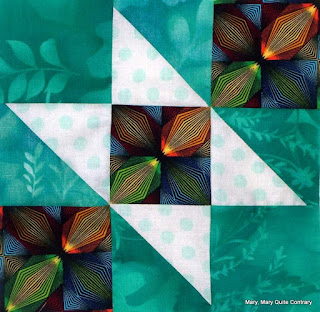 We did a Grandmother's Choice block a few weeks back called "Contrary Husband", seen here. This is the mate to that one, "Contrary Wife." Seems a fitting pair of blocks for a blog entitled "Mary, Mary, Quite Contrary."

I have also been working sporadically and somewhat diffidently on "My Guy." The challenge is over, all that is left is the mechanics of sewing on borders, a task I truly dislike. I cut up all the pieces for this quilt prior to retreat. Another mistake and one I will not repeat. I didn't like the blandness of the original pattern and in brainstorming with others at the retreat, came up with the idea of adding small red strips in between the columns of blocks. That did the trick as regards blandness, but now the borders aren't long enough. I am in the process of inserting red strips randomly into the outer borders to lengthen them. I think it looks better that way, so it's not a problem, just more fiddling with the hated borders.

Also on retreat the borders for my Bonnie Hunter Easy Street mystery quilt were sewn on. It's a simple task, but - again - BORING. It managed to suck up half of a day of sewing at the retreat. Here's a look at the borders. The top is nicely pressed and quite large, so I didn't unfold it for the photo. 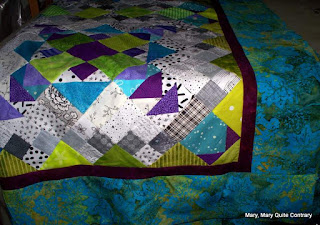 I will be taking a couple of things over to the longarm quilter this week. That will at least free up a bit of space in the old sewing nook.
By Mary Ellen at June 09, 2013