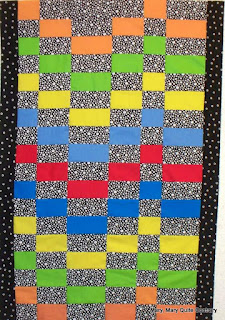 Another baby quilt under my belt. This is the second in a series using this layout. Here is the first one: 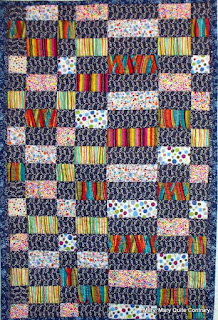 It is not as successfully visually because I paid little attention to where the various fabrics were placed. It is still a nice baby quilt, but it could have been better. I was feeling my way here with fabrics I had at hand while at a Sew Day with other guild members.

Weekend before last, my guild had a three day retreat and while I didn't finish anything, I was able to make progress on several fronts. Here is one block of four that I need to make for a throw sized quilt.
It's "Dogs in Sweaters" by Elizabeth Hartmann. 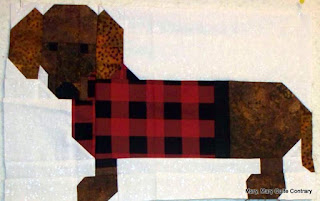 I also completed another round of color on Bonnie Hunter's 2016 Leader/Ender challenge. Photos when I unearth the top from the boxes of stuff I hauled back from the retreat.