I have been busy but not blogging. I have started the 2015 New Hexagon Quilt Along by Katja Marek. It is an English paper pieced project and I am using the paper pieces from PaperPieces.com. This is the first rosette which has 37 individual pieces in it. These are the first 7 hexagons on the block; they are not in the place they will actually be in the finished rosette. There are 12 rosettes but not all are as large as the first. 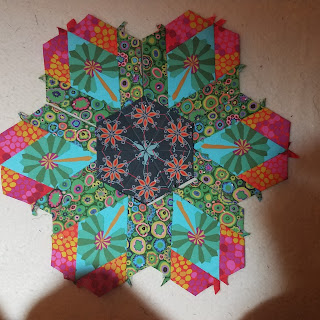 I took two workshops with Lynn Harris - one on string piecing without foundation fabric or paper and another on tiny piecing. Here are the results from tiny piecing.

And the baby quilt from the string piecing class. 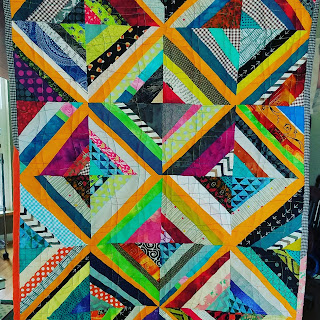 Last Saturday was a workshop with Candy Grisham, a talented local quilt artist and teacher. The workshop was Modern Dresdens. I had taken this workshop once before at a LQS, but Candy has tweaked the class with even more variations and I really don't like most of the earlier ones I made. The color palette just wasn't working for me. I did salvage a couple of the earlier plates though and have added them to the mix.

Since I began writing this post, the Dresdens have been moved to the design wall when I finally was able to take something else down. Candy mentioned that black and white prints make a good background for multi-colored bright plates. That reminded me that I have several yards of a black and white Ikea fabric, So here they are in no particular order. 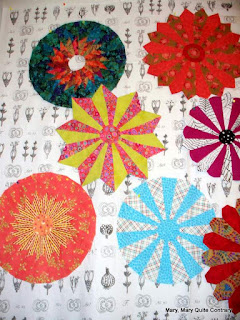 Back in October our guild had a workshop with Teajuana Mahone. The project was 3-D Scrappy Stars. I finished mine just today, adding the border using Kaffe Fassett's Leopard Lotus in black. If you look at it up close, the border fabric has many of the colors that are in the stars. From a distance it looks as though it's Christmas fabric. 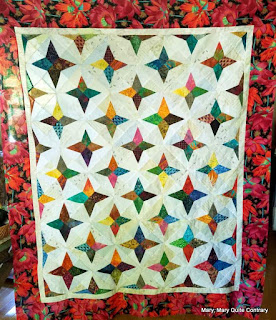 I am going to have to quilt this myself even though it's bigger than what I like to deal with. The stars really are "3-D" and have free edges. When I had my Halloween top long arm quilted last year, the quilter had a problem with the narrow little flange (about an eighth of an inch wide) that circled the rings. It caught on her hopping foot and she basted tissue paper over the flange to prevent that from happening. I can just imagine what kind of problem the free edges of the stars would present.

Last but not least, I attended an applique class on Friday with Irene Blanck. She is an Australian quilter, teacher, and designer and the workshop was to learn her technique for making a clamshell quilt. Here is what we learned how to make:  http://www.focusonquilts.com.au/bl_portfolio/clamshells. I have always wanted to make a clamshell quilt but it always seemed fiddly and as though it would be difficult to get everything lined up. Irene has a slick technique and I have a new evening-in-front-of-the-television project. Irene was in town for International Quilt Market which was held here in St. Louis for the first time in 20 years. It is really disheartening to know that all your favorite people are in town for market, but that you can't see them because it's not open to the public. There was a call put out to the local guilds by the organizers for paid help. But they made such a doggone big deal of indicating that you would be working, that you couldn't buy a thing, and that there would be precious little time to even walk around and look that I passed on the offer.