Elf Mode and an Old UFO 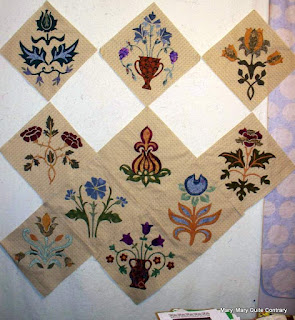 I dug out an old UFO last night and have begun to work on one of the three remaining blocks. It's a William Morris sampler, Friends of William Morris. After finishing up the appliqued borders for my guild's 2017 raffle quilt, I  needed something to occupy me in the evenings while winding down and taking in some television. These blocks are all hand appliqued. The border consists of scrolls - one in each of the eight setting triangles as well as smaller complementary ones in the four corners. I have never liked doing anything more than once, so will probably do those with fusible applique. A mish-mash of techniques, I know, but it's the only way that I can see getting it done. Here is a closeup of the most challenging block so far. Those thorns were a literal pain to do. 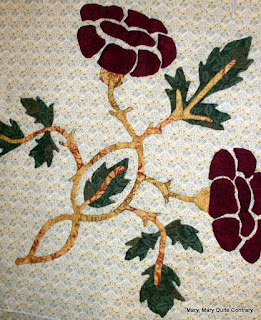 This project was ordered as a BOM from Stitchin' Heaven, but once it came with the first month's fabrics, my friend and I returned all the materials except the pattern. We did not care at all for the fabrics we were sent. They were really blah and we felt we could do much better. Our LQS had gotten in the entire line of fabrics by Barbara Brackman for Moda based on William Morris' artwork. Not all the fabric is from that line. For example in the above rose block only the background fabric and the green fabric are from that line. The gold and red fabrics are not.

I have ordered BOM projects from Stitchin' Heaven previously and they were all quite nice, so I don't want to bash them. They have a wide array of wonderful BOMs and their customer service is fantastic. When I called about my disappointment in the fabrics I was sent (all high quality - just didn't like them), I was given immediate satisfaction, told to keep the first month's worth and the pattern, and given a complete refund for that month to boot. I really feel that I came out ahead on this as I was told to keep the pattern, which consists of a full-sized sheet for each block.

Word of warning, though,about appliqued BOMs. You need to pin down with the company offering them whether the applique is intended for fusible or hand applique. My preference was for hand applique, but it is apparent that this project was meant to be done with fusible. Many of the points - such as the tiny thorns - are nearly impossible to do by hand applique. I should have modified the pattern before beginning to make them more suitable to that technique. I couldn't tell from the web site prior to ordering which technique was favored by the pattern. I am sure that a phone call would have cleared this matter up had I known more before ordering.

I am making several of these simple table runners for staff at the elementary school where I tutor one day a week. The pattern is a free one from Julie Cefalu at The Crafty Quilter. I have made three so far and started on a fourth today.

They are super easy to make, using just one mini charm pack of 2.5" squares, plus some additional yardage for the alternate squares and borders. Add a bit of jumbo rick-rack and fusible applique and call it done. Of course, you don't have to use a mini charm pack. I just had a bunch of them that have jumped into my shopping bag the past couple of years and decided it was time to use them. The project does not use all the squares in the pack, so I see a few more made with all the leftovers.
By Mary Ellen at November 24, 2015