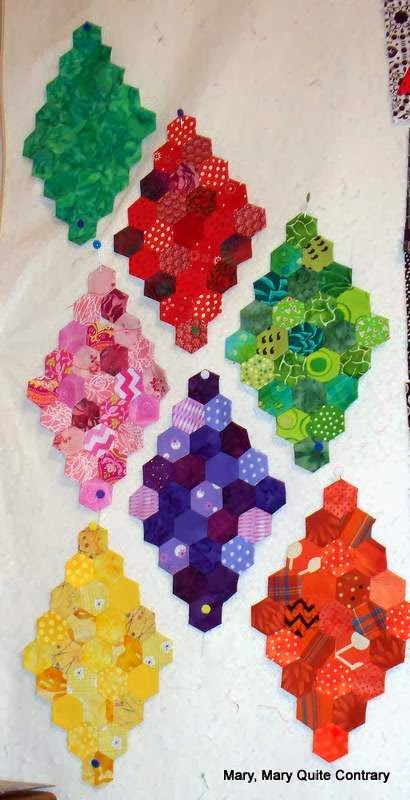 As I have mentioned, I do a lot of slow quilting. There is no need in my household for more quilts, so I indulge myself and work on things that take time. I have finished several more of the diamonds made of hexies. Next up is a blue one. I have also been making the March block from The Hexie Blog. I see as I crafted the link to it that I have put the hexies together incorrectly. Inasmuch as they are nearly completely sewn down to the background, they are going to remain wrong.

I have also been plugging away at the TQS 2013 BOM. When this project was started, my thought was that it would be a totally scrappy quilt. But the red violet background to the new York Beauty arc blocks looks good not being scrappy and provides a cohesive element to the quilt. So, having run out of the fabric, I turned to the internet to find more. Cyberspace has saved my bacon before and did so once again. The fabric is Suede by P&B textiles. Saving the selvage with that information printed on it allowed me to find more of it at The City Quilter in Manhattan. This shop has been featured on Martha Stewart's television program as well as in several magazines. Great customer service. The fabric was ordered on Tuesday and arrived on my doorstep today. 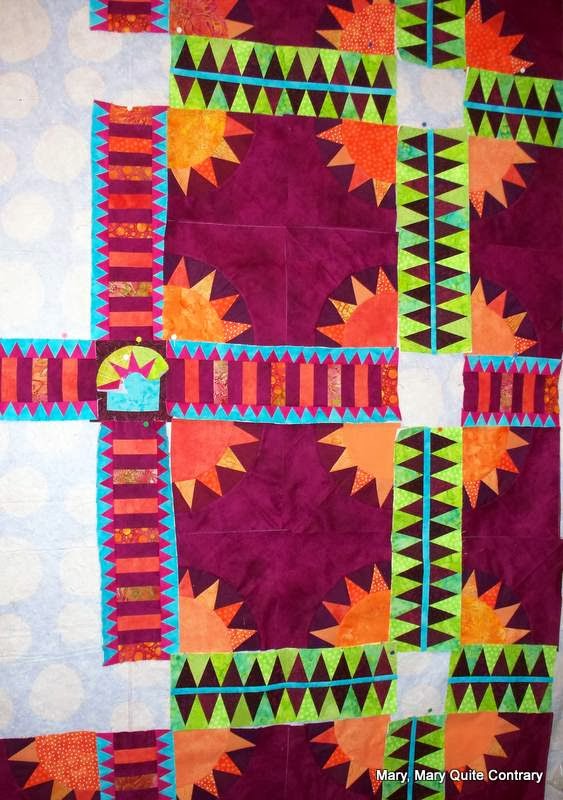 I also finished sewing together 15 or so of the blocks from the Freedom Quilt that I am helping the students at a local elementary school make. So, the sewing machines at chez moi have been getting a good workout this week even if I haven't posted much.

Oh, almost forgot, that I also made five blocks for Kevin the Quilter and his block drive here. Kevin is soliciting readers to make five simple blocks for his ongoing Quilts of Valor. I was happy to help! No photos of my blocks as I zipped through them, put them in an envelope, and mailed them off before the idea of taking a photo even occurred to me.